How does music affect you?

Music and the brain

Music triggers various parts of the brain, making it an excellent therapeutic or mood-altering tool. Music’s pitch, rhythm, meter and timbre are processed in many different parts of the brain, from the prefrontal cortex to the hippocampus to the parietal lobe. Rhythm and pitch are mainly left brain hemisphere functions, while timbre and melody are usually processed in the right hemisphere. However, meter is processed in both hemispheres. Spatial-temporal tasks (2-D and 3-D manipulation of physical objects and spatial reasoning needed for building structures, etc.) are also located in the same areas of the brain that are triggered by music. Listening to music triggers the areas of the brain that have to do with spatial reasoning. 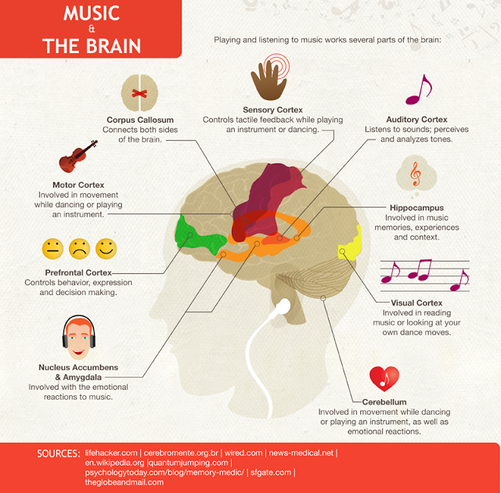 Here are the different things that happen to the brain when music is experienced in different ways: 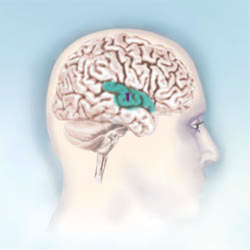 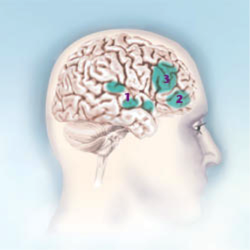 Imagining music- Singing a song or imagining a tune in your head triggers the auditory cortex even though you are not actually hearing the tune. This activity, however, happens in small, separate areas (1), and to a smaller amount. The inferior frontal gyrus (2) is usually connected with remembering memories and is therefore triggered as you remember a song. Scientists think that the dorsolateral frontal cortex (3) is responsible for holding the song in working memory while it is being imagined. 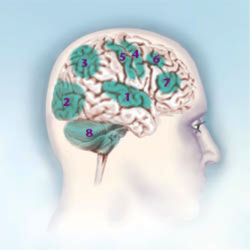 Playing music- There are not many activities that use more parts of the brain than playing music. Playing music uses complex feedback systems that take in information, such as pitch and melody, through the auditory cortex (1), and this helps the performer hear and adjust their playing. The visual cortex (2) is activated by reading or even imagining a score, while the parietal lobe (3) is connected to many different processes, such as computation of finger position. The motor cortex (4) helps control body movements, the sensory cortex (5) is triggered with each touch of the instrument, and the premotor area’s (6) functions are unknown, but it somehow helps perform movements in the correct order and time. The frontal lobe (7) plans and coordinates the overall activity, and the cerebellum (8) helps create smooth, integrated movements. 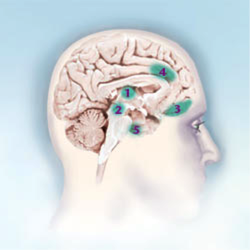 Reacting emotionally to music- When you get "chills" from a piece of music, the "reward" structures in your inner brain (cross section), such as the ventral tegmental area (1), are triggered. These are the same areas that are activated when you experience other pleasures, such as eating tasty food when you are hungry. If you are listening to a song you find pleasant, the amygdala (2) becomes active. This is the part of the brain that is usually triggered by negative emotions, such as fear. 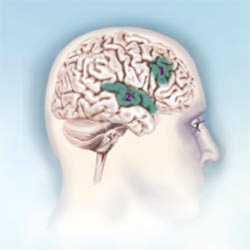 Absolute pitch/tone deafness- Tone deafness is a hereditary (based on inheritance) condition where people are not able to tell the difference between musical notes. Tone deafness is known as amusia (becoming tone-deaf after birth) or congenital amusia (born with tone-deafness). People who are tone deaf have no trouble speaking or understanding speech or making sense of everyday sounds, but they can’t recognize pitch, which is important to understanding music. Scientists are not sure what part of the brain is responsible for this activity. While many people suffer from tone deafness, perfect pitch, the complete opposite, is not as common. Beethoven and Mozart are both believed to have had absolute pitch. Perfect pitch, or absolute pitch, which happens when a person can recognize or sing a note as easily as they can tell the difference between two different colours, without the help of a reference. Scientists have found that the dorsolateral prefrontal cortex (1), which is used in gaining skills and remembering memories, and the auditory cortex (2) work together to produce absolute pitch. Absolute pitch is a combination of genetics and environment that create this unique skill. Studies have shown that musical training must take place before the age of 15 for perfect pitch to be made.
Musical Hallucinations- Nick Warner, a psychiatrist in southwest England, says there is a big difference between imagining a song (also known as having a song stuck in your head) and having a musical hallucination. According to Warner, a song in your head is something you have a lot of control over and you are aware that the song isn’t actually playing. With a musical hallucination, however, music plays in your mind that cannot be stopped, and the sound is so real that you think it is actually playing somewhere nearby. Since musical hallucinations have not yet been studied in depth, it is difficult for scientists to know which sections of the brain are activated when someone experiences them. It is thought that the brain may work the same way as it does during imagining music, but there is no solid evidence. When it comes to the brain, a musical hallucination has the same qualities as hearing music, but does not have the same triggers. Dr. Tim Griffiths, a neurologist at the University of Newcastle Upon Tyne in England, thinks that the hallucinations happen because the music-processing regions in the brain are looking for signals to interpret. The brain could be creating occasional random impulses that some regions of the brain mistake for sound, even though no sound is coming from the ears. There is no cure for musical hallucinations, since researchers aren’t sure of the cause. But fighting the hallucinations with actual music or sound has worked: Some patients can turn on a radio or start a conversation, which interrupts the musical hallucination. Other studies suggest that improving someone’s hearing and reducing the amount of social isolation may work as a cure. It has been found that anti-psychotic medication in low doses can also be helpful. However, none of these methods works completely.
Research shows that musical training in children can improve the activity of important neural systems. The changes usually happen in areas of the brain that are activated when playing an instrument. These areas include: the auditory cortex, used for processing musical tones, the motor cortex, an area activated when using hands or fingers, the cerebellum, a part of the brain used in timing and learning, and the corpus callosum, which acts as a bridge between both hemispheres of the brain. Other areas of the brain may also be improved, but this doesn’t mean that the improved neural activity will help with other activities. Certain scientists think that musicians who have had early training use their brains differently than non-musicians. For example, musicians’ brains function with more complexity compared to non-musicians. Some scientists also believe musicians usually use the left half of their brain when analyzing music. The left hemisphere processes language and is used for reasoning tasks, which is why scientists believe musicians process musical information more analytically than those without musical background/training. For these kinds of brain changes to happen, a musician needs musical training early in their life. If musical training doesn’t happen until after puberty, there isn’t as much change to the brain. Brain improvements are also different based on the instrument type. When a violin player, for example, listens to a violin tune, the activity in his or her auditory cortex is quite high. But when the same violinist listens to a trumpet tune, the activity in the auditory cortex is quite small. In the past, scientists thought that people experienced most of music-related activities in the right hemisphere, where emotional and spatial information are processed. However, today scientists know that both hemispheres work together when it comes to processing music. 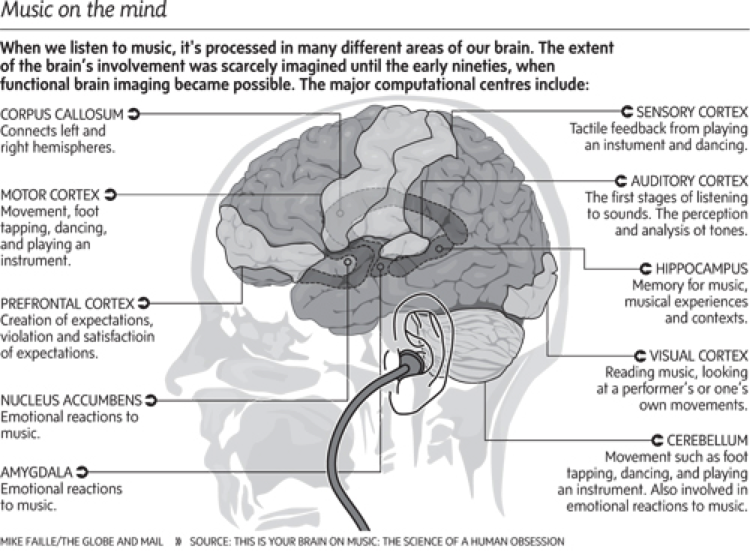